We have returned to the Regional Farmer's Market in Binghamton! Every Sat 9-1

We are a small farm offering a wide range of products grown with care and compassion.  We cherish our livestock and our land! 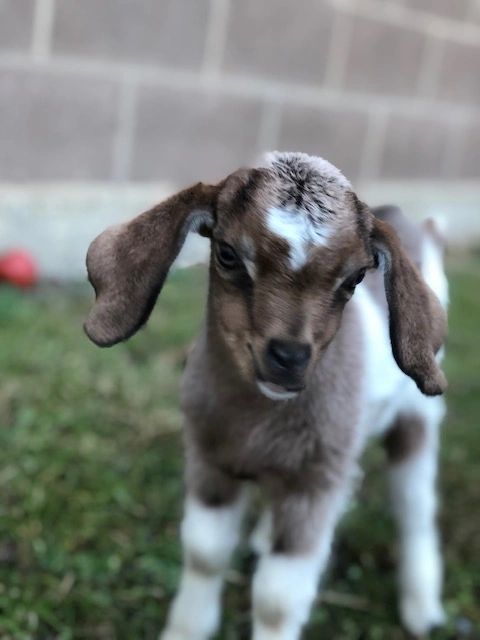 Michele grew up on a "hobby" farm in Greene County, New York. Bert hails from "The Valley - Waverly, NY".

Michele's family had a few goats, rabbits, chickens, horses, and an occasional beef cow.  She was a 4H member and took agricultural education in high school becoming very active in the Greenville FFA.  She earned degrees from SUNY Cobleskill and Cornell University and eventually became a high school agricultural sciences teacher.  Eventually (in 2011) Michele met Bert who loved the outdoors and always wanted to have a farm.  He and his son Joshua raised meat and egg-laying chickens for years.  Michele and Bert officially began farming in the summer of 2013 by raising flocks of Turkeys and egg-laying chickens.  They started raising pigs in 2012 for their own and their family's freezers.  They added Freedom Ranger (meat) chickens and finally .... goats!

Their animals are raised humanely and are never fed animal bi-products. Chicken and goats are free-range and any supplemental food for birds and pigs consists of a local feed.  They use as much of any animals that are processed, canning lard as well as  stock from the chickens and turkeys.

In 2018, Bert and Michele purchased a piece of paradise - property once owned by the late Dr. Max Brunk, professor of agricultural economics at Cornell University.  To him, it was known as "the Cabin" - to us - it is a piece of heaven and many dreams came true!

We are still transforming "the Cabin" to a farm - we added pastures, a beautiful barn, and soon it will house a creamery.  We have roughly 40 goats (the number changes with each birth and sale)...50 or so laying hens, 25 egg producing ducks, and a handful of guinea foul to keep the ticks in check.  In September of 2019 we were blessed with two Kunekune sows - both were bred and just two weeks later, we were also in the "grass fed pork".  We also have Livestock Guardian Dogs - Great Pyrenees (Dixie, Roscoe, and Daisy).

Our mission is to provide our customers with a quality product that is wholesome and made in an environment that puts our animals' well-being first.  We pride ourselves on being good stewards of the land.  We see ourselves as life-long learners - that is we learn and choose what practices to adopt.

We farm and craft because we choose to.  We enjoy what we do and are confident that it shows in our high quality products whether it is a dozen meticulously presented eggs or a bottle of soothing lotion.

Find us on Social Media

Do you have questions or comments? Send us a message, and we will get back to you soon!

By appointment only please...